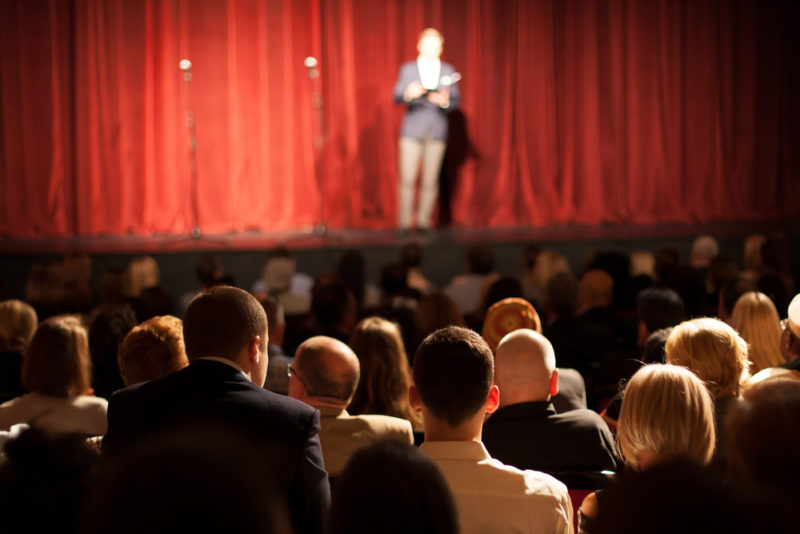 People have always enjoyed a good laugh. From the one about the two woolly mammoths, through Shakespeare plays and Vaudeville shows, to the arena-filling comedians of today, comedy has a special place in our culture.

Nowadays there appears to be more comedy than ever; local comedy clubs, the Edinburgh Fringe, YouTube, comedy series and Hollywood movies. However you like your comedy served up, there is a probably a source catering to your taste.

Despite all the options, there are still key challenges in the industry. Firstly, it’s hard for all but the very top acts to make a living. It’s great that Bo Burnham, for example, can go from YouTube recordings to sell-out shows, but giving comedy away for free online isn’t sustainable for most comics.

At the Edinburgh Fringe, comics usually pay for their own travel, accommodation and venue hire, so they are out of pocketby the end of their run. Other art forms, such as music, theatre, dance, literature and visual arts can receive funding from the Arts Council. Unfortunately comedy isn’t eligible.

In new media comedy has always been slightly in music’s shadow. It has been slow to embrace digital platforms and instead courts terrestrial broadcasters with limited opportunities and the dwindling opportunities for DVD deals.

Where does the future of comedy lie? Will diversity be limited as only the ‘panel-show’-worthy survive? Or will breakthrough comedians catering to a wider range of tastes find their audience with the launch of new online comedy platforms?

Firstly, we predict that niche online streaming services, such as NextUp Comedy, will draw in new audiences who wouldn’t previously have considered themselves ‘comedy fans’. The online space doesn’t have the same barriers to entry as traditional comedy clubs which aren’t comfortable places for everyone.

Watching comedy online is more flexible – you can do it in your own time, wearing your PJs (if that’s what you like to do). You can risk taking a punt on someone new. You might just discover a new comedian whom you’ll be desperately keen to see in person.  As a result the ability to stream comedy will bring bigger, more wide-ranging audiences into live comedy venues.

Capitalising on their work

Online video also provides greater longevity of individual shows for comedians. Imagine writing a full hour of carefully crafted material only to have it disappear after a month in Edinburgh. With much easier access to great camera equipment, when their shows are captured and preserved, new comedians will have a better chance of building an audience of fans, creating a new revenue stream, and developing a viable long-term comedy career.

Greater career opportunities for new comedians will mean a broader range of comedy. There is no one carefully curating what you watch online – the internet caters to all tastes. Giving airtime to a new ‘out there’ comedian in a club can be a risky move. This caution also plays out on TV, where jokes that are considered potentially offensive or borderline are being cut by editors.

Legendary comic George Carlin said “’I think it’s the duty of the comedian to find out where the line is drawn and cross it deliberately.”  Many people yearn for comedy that pushes boundaries. We see it time and time again, with comedians like Bill Hicks and Frankie Boyle; pushing the boundaries of what is acceptable helps people laugh at the harsh realities of life.

By establishing online comedy as a major platform, viewers will have a choice over what comedy they watch and comedians can be their true, unedited selves. Hopefully, this will contribute to a new golden age of comedy, where creativity and diversity are highly-valued.

Live comedy will always have a special place in the nation’s heart and since comedians like Michael McIntyre are filling huge arenas, there’s no reason why comics won’t become the headline acts at big arts-focussed festivals like Glastonbury. Festivals like Latitude and Bestival already have dedicated comedy tents and sign-up big names.

While the idea of a specialist comedy festival, in the same way we have music festivals (in fields with tents etc.), may not quite work, I think the dominance of comedy at mixed arts festivals like the Edinburgh Fringe will lead to more cities hosting comedy festivals – utilising pubs, clubs and libraries as venues.

We already see this happening, for example at Brighton and the Camden Fringe, which, although only 10% of the size of Edinburgh, have potential to grow significantly. Then there are other places, like Bristol, that could serve as great city-venues.

Technology will help comedians spread their material, but it could also change the very nature of their acts. Using props, sound and lighting, comedians already transport viewers into different worlds, whether it’s a childhood flashback or a surreal post-apocalyptic sketch. As VR, AI and Augmented Reality become cheaper and more accessible, I can imagine comedians using these technologies to transport the audience even further into their weird and wonderful minds.

Far from technology leading to a dearth of creative comedy, I am optimistic that comedians will use technology to further engage their audience, find new fans, mix things up a little, and continue to serve an important purpose in culture and society. And the way things have been going recently, we’re going to need them!

SARAH HENLEY is co-founder of NextUp, a worldwide subscription video-on-demand platform specialising in stand-up specials. NextUp, described as is ‘The Netflix of UK Stand-Up’ (engadget), showcases the full spectrum of the live comedy circuit from sketch, character and storytellers, to gag merchants, observationalists and surrealists. As well as familiar household names, there are also acclaimed rising stars and circuit legends for you to discover.

NextUp members have access to recording tickets and exclusive discounts whilst comedians are supported through a 50/50 revenue share model. If you’re a comedian interested in being on NextUp, please get in touch.