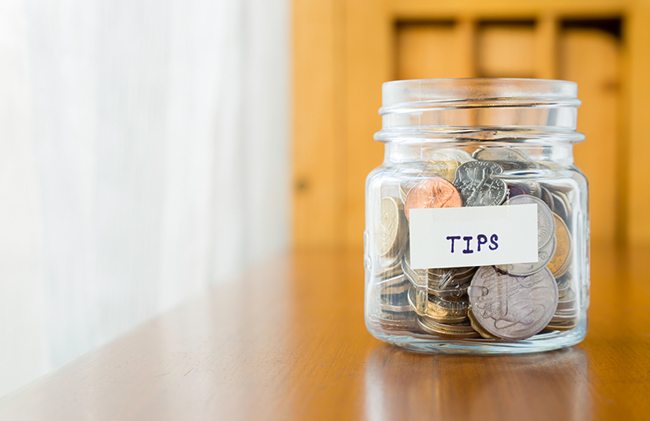 But I’ve finally come to my senses and now find the habit dated and downright embarrassing for both tipper and tippee. All I’m doing is supporting those who don’t tip. And when I can no longer work out why I’m tipping one kind of worker and not another, it’s time to start questioning the whole sorry scenario…

What finally made me snap was getting into a cab with a couple of heavy small boxes which the cabbie wouldn’t help me with because he had a “bad back”. I only needed to move them 300 metres from one end of London’s Bond Street to Sotheby’s.

The meter hardly registered and on a £3 meter charge I gave him 50p more than the nothing he deserved. Yet still the miserable bugger opened the window and threw my tip back at me, shouting it was “a bloody insult”.

When he said a pound would have been more fitting, I told him I certainly had no intention of insulting him twice and went angrily on my way…

When it started as a common practice in the late 19th Century, tipping was seen as a kind-hearted thank you for providing great service, not an expectation. Simply, it was a nice thing to do.

But it has gone too far. Tipping is no longer about showing appreciation for decent service. And it now has nothing to do with generosity. Tipping has become a social habit that borders on the nonsensical. It’s about being brainwashed by society to “do the right thing”.

And, frankly, enough is enough.

What makes it right for one type of service industry worker to expect to be tipped for doing their day job, but not another?

I own various companies and none of my staff has ever received a bean in tips, no matter how good their work is.

My installers at The Air Conditioning Company give our customers a far better service, and for far longer, than any moody taxi-driver who expects a tip for doing nothing more than knowing his way around town.

But see that cabbie’s little face turn to anger if you don’t give him a tip for merely doing his job with no more diligence than any other worker.

At my Decoratum gallery in London’s West End, the sales staff give far better customer care than a gardener, sommelier, or bell-boy – and their advice could even make you rich.

Why don’t I tip the shop assistant at Selfridge’s who has served me so well for 15 minutes, yet tip the barman who took 20 seconds to pour me a drink? Because I’m a bloody fool.

If my hairdresser does a good job, the best tip I can give is I will go back. If she does a bad job I go to another salon. Yet still I tip. And why? Because I’m mad.

Until 2008 it was always illegal to tip casino croupiers if you had a run of good luck. Surely now they should give it back when you later lose a shedload of money because they dealt you a string of bad hands.

Why was I giving money to the supermarket delivery man who carries my order to the door without tripping over? Even the pizza delivery driver expects a tip for turning up at my house having managed not to crash.

All because the company he works for won’t pay him what he’s worth – meaning us tippers are left to pick up the bill, both literally and metaphorically. We are subsidising those sensible ones who’ve seen the light and decided not to tip.

Restaurants take it one step further to help us fund their wage bill, with a 12.5% gratuity, whether we get great service not. Why else do you think that most serving staff would prefer their gratuities in cash?

But when was the last time you received sincerely great service as opposed to simply good service? All adding a mandatory charge does is act as a disincentive to great service, because the staff know the employer will nick the lot to share as wages among the entire staff – including the chefs, who earn more than the waiters anyway.

In the States, the Federal minimum wage for restaurant workers who receive tips is $2.13 (£1.29) per hour in the expectation that they will receive tips that will bump up the minimum hourly wage to $7.25 (£4.41).

Can there be any greater proof that even the US government is trying to encourage tipping, rather than pressure stingy employers to pay their staff a decent living wage instead of making customers feel sorry for them?

Their argument for tipping is that hard work brings rewards. If that’s the thinking then tell the employers and make them pay their staff appropriately.

Thank goodness common sense has prevailed at one Japanese restaurant in New York. Sushi Yasuda has banned tipping. They state at the bottom of bills that “service staff are fully compensated by their salary package and therefore gratuities are not accepted”. Well done them.

Like those bright sparks, it’s about time we all got real and entered into the habit of only tipping for phenomenal service, miles over what would normally be expected of a person doing their day job.

And, to those employers who expect us customers to top up the miserly amounts you pay your staff, listen up: Your days are numbered.

Jeff Salmon, is a consummate deal maker, negotiator and entrepreneur. Whilst coming to prominence as a gallery owner and dealer on Channel 4's 4 Rooms he also has a diverse mixture of companies which include the UK's best known air conditioning company, an Insurance Loss Adjusting/Assessing company, a Complementary Health Practice and a company selling wheelchair ramps.
View all posts

Jeff Salmon, is a consummate deal maker, negotiator and entrepreneur. Whilst coming to prominence as a gallery owner and dealer on Channel 4's 4 Rooms he also has a diverse mixture of companies which include the UK's best known air conditioning company, an Insurance Loss Adjusting/Assessing company, a Complementary Health Practice and a company selling wheelchair ramps.