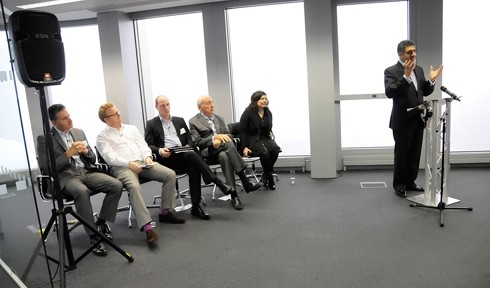 The meting hosted and sponsored by Sunday Times Top Ten Tech Track company, Telemetry, produced by Hillgrove PR with the support of Start-Up Britain, was: “Is the Cloud a boon or bust for UK business?”.
The welcome to this key UK event, being held during Global Entrepreneurship Week, was delivered with a clear vista of London from the high-rise tower by the co-founder of Telemetry, Anthony Rushton.
A panel of illustrious speakers expressed their belief that cloud-computing – which saves capital expenditure on hardware and data storage by offering Software-as-a-service solutions – is a huge opportunity for UK businesses, particularly those looking for a way to market themselves globally at a low cost. There are, however, concerns about security, and all agreed the cloud needs to be entered cautiously and used wisely.
James Caan, headline speaker, utilises the cloud for his private equity firm, Hamilton Bradshaw.
He said: “Youth unemployment is running at the highest levels ever. The Cloud will assist recovery, enabling young people to start businesses. It is a Gateway to explode entrepreneurship. Technology is showing far more growth than any other sector in terms of employment. The UK is largest exporter of goods and services online.”
Mr Caan is a great advocate for cloud-computing: “What’s useful to me as an entrepreneur is that cloud computing enables information and data access anywhere in the world, as long as there is an internet connection.”
He agreed security was a “potential impediment to cloud growth”, but there were solutions.
“One way to safeguard data is to use multiple cloud providers – spreading the risk is important and this can be achieved by spreading data among a number of cloud suppliers.”
Eric Van Der Kleij, CEO of Tech City Investment Organisation and David Cameron’s tech advisor said:
“Very few sectors can offer low capital intensive growth as does theTech industry. The number of companies in the Tech City area has doubled since the Prime Minister launched the initiative in November 2011.
The Cloud and agile development tools mean ideas can be thrown up quickly to see if they work.
We have been involved in 2,000 entrepreneur/mentor meetings in just the last couple of days of Global Entrepreneurship Week.”
Mr Van Der Kleij urged delegates to: “Celebrate, welcome and embrace the cloud”.
This was the general view and was echoed in the sentiments expressed by highly reputed global banker, Anne Boden, who told the meeting that the cloud was part of true globalisation, enabling organisations and individuals to connect their visions with the capability to realise them.
“My challenge to British entrepreneurs is: you now have access to the finest technology in the cloud – is one of you going to utilise it to become the next PayPal or Google?” said Ms Boden.
Lord Young of Graffham, Government enterprise advisor charged with cutting ‘red tape’ for business, summed it up succinctly when he said: “This is a time of incredible opportunity for new businesses so jolly well take it”.
Telemetry’s Anthony Rushton took a more cautious view of the Cloud: “Are UK companies to be reliant on the expertise of American companies?” he asked. “It is vital for us to embrace the Cloud as a launch pad, but rally around UK enterprises embracing hardware.”
He believes that technology enterprises need to “shine a light on more than just the Cloud”, illustrating his view by confessing that he had written his speech at home and fed it into a cloud-based Drop Box for later access, “but I still brought it along with me physically on a memory stick”.
He said the cloud “has limitations for tech businesses that have their own data storage capabilities”. His own, company, Telemetry, he said uses the cloud for testing purposes, but “we make it our own with our hardware”.
Telemetry, delivers and audits online video advertising for some of the world’s biggest advertisers like Reckitt Benckiser.
Mr Rushton formally announced the formation of an all-encompassing BritCom movement, aimed at putting Britain in the lead technologically.
He believes Britain is on track to become the European leader in the field of Internet Engineering, and entrepreneurs in this country are poised to benefit and prosper from this movement.
Co-sponsor of the event was Duane Jackson, founder of KashFlow, the cloud-based accounting package designed specifically for SMEs which thousands of subscribers regard as a boon.
Mr Jackson believes the full range of possibilities for business  opened up by the cloud are yet to be discovered.
Should British business move Ahead in the Clouds? After this morning’s meeting it can be confidently summed up:  Yes, it’s the next ‘big thing’ for business, but it needs to be balanced and used wisely.