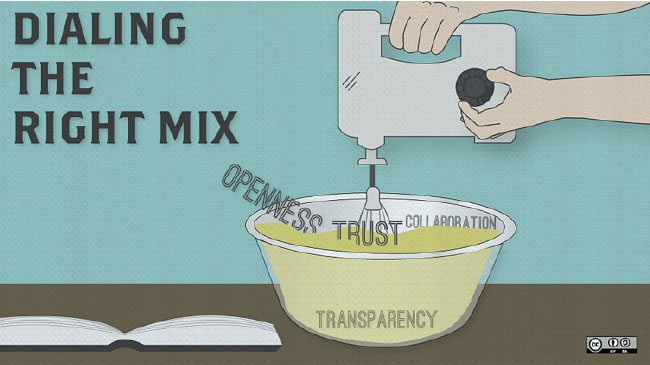 When companies known for their innovative approach are eagerly investing in and adopting open source technologies, it’s a sign that we should take a closer look and find out what all the fuss is about. This blog post examines the nature of open source and discusses practical applications for your business, and future implications for the wider business community.

What is Open Source?
In essence, open source refers to a computer program in which the source code is publicly available for both use and modification, free of charge. It is characterised by collaboration, diversity, openness, transparency and rapid prototyping. Open source relies on universal access via free licensing of a product’s design or blueprint, and peer review for finding and eliminating bugs. It is usually a collaborative effort of a developer community, within which any changes are shared and improved upon.

Open source can also refer to entities beyond software (although this use is somewhat contested), described as ‘the open source way’ – a phrase that denotes a certain attitude towards work and creation: willingness to share, collaborate transparently, and embrace failure as a means to improvement. It is a belief that to continually improve our circumstances everyone should have free access to the source code, the blueprint, or the design underlying everything we do (including government, education, law, and many other things). This approach is also described as ‘open knowledge’.

Today, open source seems to be ubiquitous – and more corporations than ever are jumping on the bandwagon, embracing the trend to varying degrees. The list of successful products is long: Linux, Bitcoin, Android, Mozilla Firefox, PHP, WordPress, Joomla, Ruby, Drupal, Python, Eclipse… For some companies, however, open source software remains something of a mystery, and its adoption is delayed by fear of the unknown. But don’t let your lack of knowledge stop you benefiting from the open source revolution – fortunately there are many quality resources and guides online:

Apart from open source, there is also a trend in collaborative software development called ‘free software’. Whilst they both rely on open code and the freedom to modify it, the difference is philosophical: the proponents of free software believe that software should respect “the users’ essential freedoms: the freedom to run it, to study and change it, and to redistribute copies with or without changes. This is a matter of freedom, not price, so think of ‘free speech’, not ‘free beer.’” (Richard Stallman from Gnu Operating System).

Tomorrow’s Trends
As open source is gaining momentum, it is definitely a trend to watch if not adopt straight away. Some of the most exciting initiatives in development include:

Open Source And SMEs – Why Choose Open Source?
What does all this mean for you and your business? How should you respond: convert to open methods, absorb some aspects only, ignore the whole thing and hope for the best? The initial reaction may well be that of distrustful rejection; after all, the idea of competition is so deeply ingrained in our business education that throwing resources at a collaborative project might seem against common sense.

On top of this initial hunch the more rational concerns kick in: security and reliability. Both of these concerns have been proven unfounded, however. Both open source and proprietary technology always involve security risks, and no actual evidence exists to suggest that open source is any less secure. Just because the source code is available, it doesn’t make it more vulnerable. In fact, often the opposite is true: having an army of independent developers devoting their time to improving the code means that all issues and bugs are identified and resolved promptly.

Similarly, the widely held belief of open source being unreliable is also becoming mythical as we witness open source software driving innovation whilst delivering feature richness and rock solid reliability. As reliance on a single vendor is negated, the development time to innovate new solutions to known issues is considerably shortened. An extensive network of guidance and online forum support exists in place of traditional customer service and support, which becomes a strength where the breadth and depth of available expertise is concerned.

So why adopt open source? Apart from the obvious financial factor, freedom from vendor lock-in has been cited as the primary reason in the past, whereas last year it was quality that attracted most attention. Big data, lower costs and system integration are the top three business problems open source is solving. Sectors leading open source adoption include media, government and healthcare.

Apart from the more immediate, individual benefits, adoption and modification of open source brings about a broader qualitative transformation to our software ecosystem. On the whole, not being tied to any particular corporate interest, open source developers are evolving a network of systems that is not only driving innovation and stimulating competition, but also prevents the formation of monopolies.

Of course, there are downsides to open source too: no one is obliged to support you (as you don’t pay anyone to do it), the risk of abandonware (usually due to in-fighting between key programmers, which stalls the project’s development when they quit), potential user confusion stemming from parallel development efforts, and a learning curve (sometimes you might have to employ someone to guide your staff through the intricacies of a particular piece of software).

When considering your company’s IT strategy it is important to take all factors into consideration and make an informed choice. In most cases, a mixed strategy – of adopting both proprietary and open source software – will work just fine, as long as you know what your specific IT needs are and how software products can address them.

Open Source, Open Mind
All signs point towards open source being the future of software (and beyond): as the problems facing us complexify, so should our approach to solving them. The benefits of collaboration and collective intelligence seem to far outweigh any potential security and reliability concerns.

Open source as a way of thinking presents us with a chance to overcome many issues created by the rules of unrelenting competition that has in so many cases led to the monopolisation of various industries. Finally, open source offers an avenue for innovation that is not tied to the individual corporate interests of leading companies and venture capitalists too afraid to invest in products competing with already existing products that belong to the industry giants.

I would hope that at some point in the near future both the pressures that open source exerts on quality, cost and accountability, as well as the open way of thinking that support it, seep through to all industries so that we can start taking full advantage of the increasingly collaborative information environment we are steeped in (cloud computing, big data and so on). If adopted fully, open source has the potential to become a revolution similar in magnitude to that of the development of the internet and the rise of a networked economy.

Do you need help with your IT strategy? Give us a call today to discuss what we can do for you and your business!

[box]BUNKER48 provides a full technical & digital service for SMEs, including building websites and managing your IT needs.[/box]