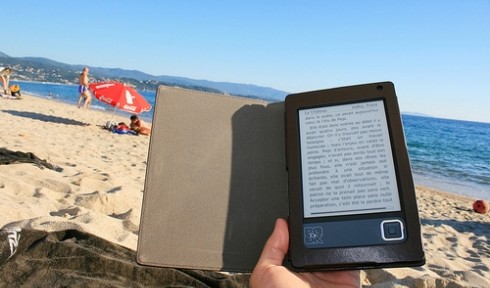 Apple iPad
The Apple iPad launched last week in the US and we will see it in the UK at the end of the month. Though the device can do plenty of things – email, word processing, games and photos, among others – it is its capability as an e-book reader that has the publishing industry salivating. The iBooks app will let users download newspapers and books instantly from the familiar iTunes store they go to for music and video. Unlike e-readers that are based on e-ink displays, the iPad has a colour LED screen which means photographs will look better and it’s even possible to include video clips in a book. However, some readers may find the backlit screen tiring to read on for long periods and prefer an easier-on-the-eye e-ink screen.
Price: from £368

Amazon Kindle
The Kindle was the first e-book reader to go mainstream, though British book buffs had to wait until late last year for their chance to buy one. Even now, the Kindle must be bought from the US Amazon store, where it’s priced in dollars, and shipped from the US, meaning it’s subject to import duty. The books are sold in dollars too but they’re delivered wirelessly, meaning no messing around with USB leads and desktop applications. Amazon’s Whispersync system ensures that your bookmarks and notes are stored on the bookseller’s servers. That means, for example, that iPhone users can start up the Kindle app and carry on reading from the same point that they left off on the Kindle itself. The Kindle’s major downside is that the books cannot be transferred to other devices. If you decide you want to switch to a different e-reader, your e-books will be left behind.
Price: $259 from Amazon.com

Sony Reader
Sony makes two e-readers – the compact Pocket Edition, which will fit in the pocket of a suit jacket, and the Touch Edition, which is the same size as the Kindle. As its name suggests, the Touch is touch screen driven, either using a finger or the supplied stylus. Both devices are more aesthetically pleasing than the Kindle but neither has the advantage of wireless, meaning that books have to be added to Sony’s Reader Library desktop application and then transferred to the device by USB. A Reader with wireless capability – the Daily Edition – is available in the US but has not yet been released in Britain. One advantage the Sony Reader has over the Kindle, and it seems likely, over the iPad, is that it will work with any e-books in the ePub format. So while Amazon and Apple tie you to their bookshops, the Reader will happily accept books from WH Smith or Waterstone’s or e-book newcomer Kobo, to name a few.
Price: £149 (Pocket) £219 (Touch)

Smartphone
More and more of us carry smartphones around with us these days and if you don’t want to carry a second device with you just for reading – or if you don’t read enough to make a dedicated e-book reader worthwhile – you could just read e-books on your smartphone. Kobo, an online bookshop that recently launched in Britain, prides itself on being “device agnostic”. If you want to read on your iPhone, BlackBerry, Palm Pre or Android phone, they have an app that will deliver books to you. There are plenty of other alternatives too, such as the popular Stanza reader for the iPhone. Serious readers will find the screen too small for long sessions and many find backlit mobile screens tiring on the eyes but for short bursts or for occasional readers, the smartphone is easily smart enough to be your mobile library too.
Price: dependent on contract