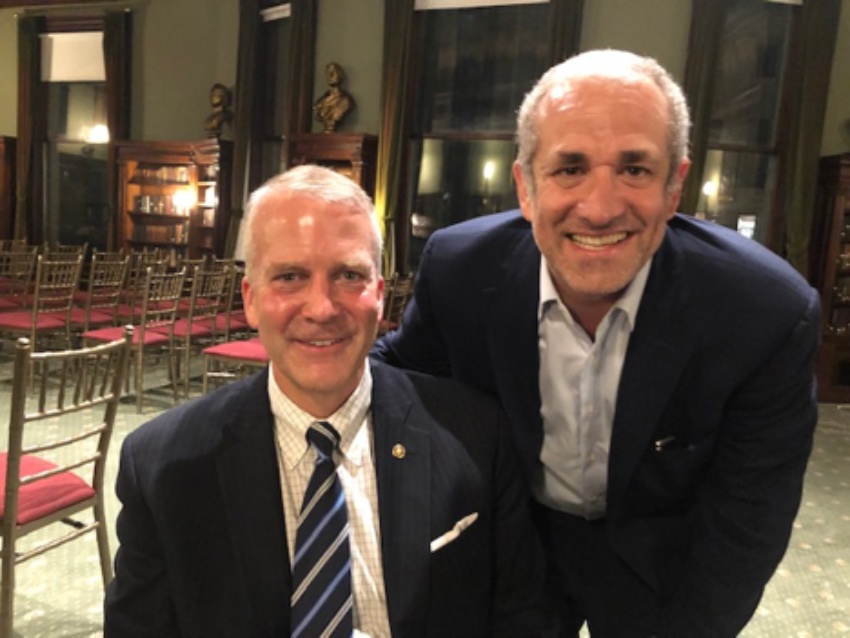 Stephen Odzer grew up in Brooklyn, New York. He went to Yeshiva of Flatbush High School and took the Brooklyn College Scholars Program.

At the age of 18, Odzer went into the paper goods business and started his first company out of his parents’ basement. In 2000, Odzer (pictured right) was named the Ernst and Young Entrepreneur of the Year in distribution. He sold his first company to his largest competitor, Brooke Supplies, in 2006.

Stephen Odzer is currently the CEO and founder of BT Supplies West Inc. of Henderson, Nevada. The company just announced a partnership with the NHL’s newest franchise, the Vegas Golden Knights, for naming rights to their new state of the art practice facility. Odzer also recently launched the Stephen Odzer Scholarship Foundation to award 20 college/university students with financial assistance for tuition. You can find out more about the scholarship at https://www.stephenodzerscholarship.com/.

What do you currently do at BT Supplies West?

I am a visionary. I dictate direction. I’m like a team leader while also being a cheerleader. I maintain relationships with large accounts.

What was the inspiration behind starting your own business?

Ever since I was a kid, I wanted to build a meaningful enterprise. I went to school with some of the wealthiest kids in the country, so I was surrounded by children with CEO parents of huge enterprises. I wanted my business to be meaningful.

Who did you look up to as a role model when you were starting out in your career?

Other successful business leaders. There was a guy named Barry Halper who owned a small percentage of the New York Yankees. He helped me when I started my company. Another was Edmund Safra. He was a banker, and he helped me through a lot.

Looking back, is there anything you would have done differently in your career?

Of course. When you want to conquer the world, sometimes you’re impulsive and make mistakes. So, I’d be less impulsive if I had the chance to do it again.

What advice would you give to someone starting their own business in today’s world?

My advice is to be relentless and organized.

How do you continue to grow professionally?

By spending a lot of time with very successful people. This gives me the ability to see and learn from what they do right and what they do wrong.

What are you working on next?

We just announced a major partnership with the Vegas Golden Knights NHL team, signing a long-term partnership for naming rights to their new facility in Henderson – Lifeguard Arena. Now it’s time to begin working on the next major partnership.